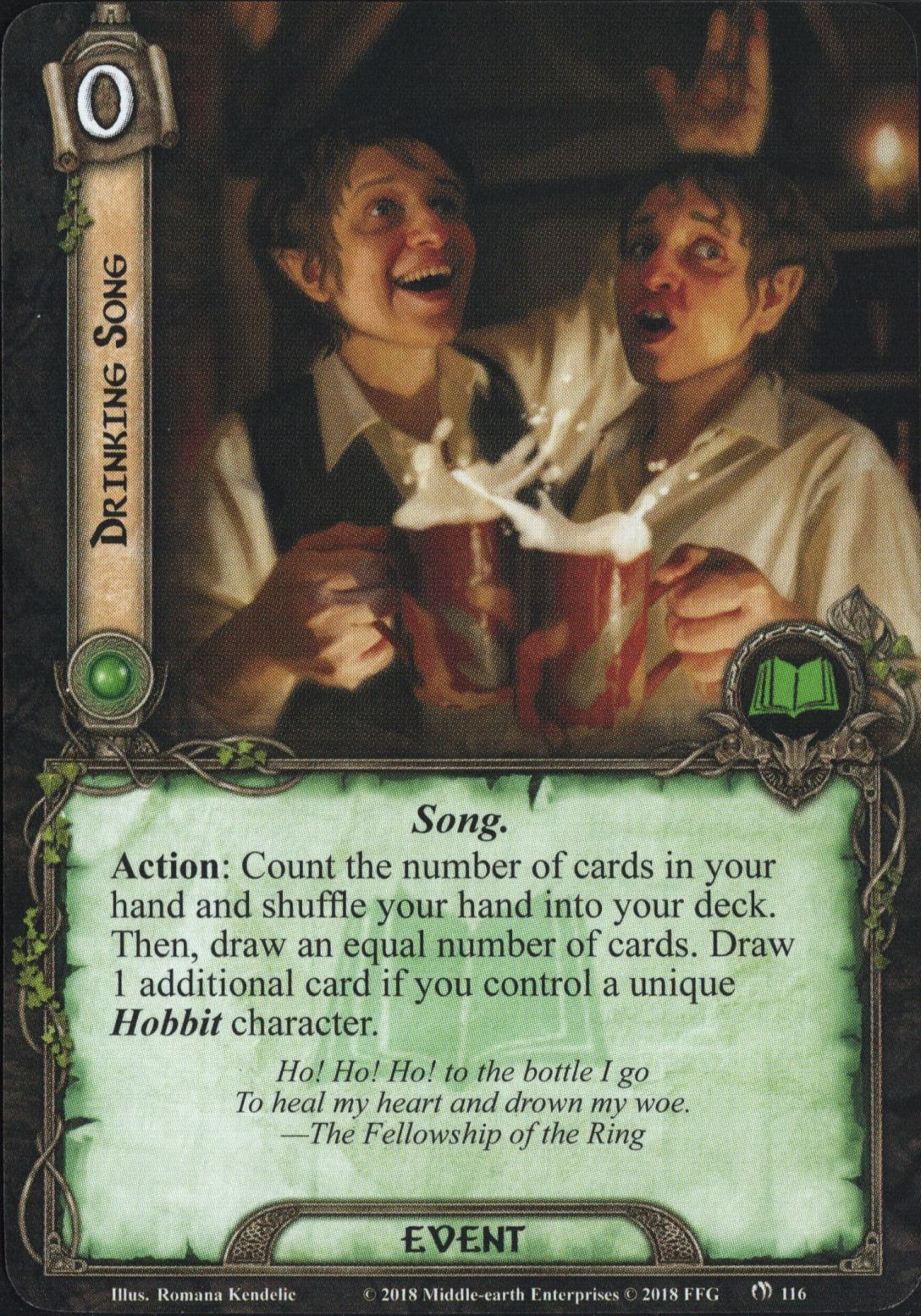 Tolkien’s works feature many songs. It considering that a major theme in the Lord of the Rings is joy of everyday life and simple pleasures that it would have a couple drinking songs. There is “Ho! Ho! Ho! To the Bottle I Go” that used for the flavor text. The hobbits sing it after meeting Gildor and his entourage of elves.

To heal my heart and drown my woe.

Rain may fall and wind may blow,

And many miles be still to go,

But under a tall tree I will lie,

And let the clouds go sailing by.

Fellowship of the Ring, Chapter 4: A Short Cut to Mushrooms

There is also “The Man in the Moon Stayed Up Too Late” that Frodo sings when he gets up on a table at The Prancing Pony.

There is an inn, a merry old inn

beneath an old grey hill,

And there they brew a beer so brown

That the Man in the Moon himself came down

One night to drink his fill.

Fellowship of the Ring, Chapter 9: At the Sign of the Prancing Pony

The above is an just an except as the full song is quite long.

Many of the cards with draw effects in the game has ties to knowledge in the game. Daeron’s Runes (a writing system), Deep Knowledge, Gandalf’s Search, Mithrandir’s Advice, etc.

Drinking Song is an interesting entry into melding this theme and mechanism. It can be argued that songs are another medium to convey knowledge. Particularly with many of the songs of the ancient heroes and deeds in Middle Earth. Drinking Songs, however, generally are not these grand epic songs. They’re silly, funny, and fun to sing while drinking impairing one’s wits. I think this is why it has a player shuffle their hand back into the deck and redraw those cards. It is represents the alcohol scrambling the knowledge in their head.

The idea behind combining this card with more card draw, is it increases the number of cards you reshuffle into the deck. This synergy is best if a player truly wants an extra mulligan with this card ensure getting a key card or to really thin their deck. Peace and Thought is a really strong choice for this since it draws 5 at the cost of a single card. Erestor hero also especially on turn 1 can help maximize that new hand if played on turn 1. Deep Knowledge and Daeron’s Runes also can help incrementally increase your hand size especially if you have more than 1 or draw into multiple copies.

Drinking Song and Love of Tales can create a resource acceleration engine in mono-Lore. Lore doesn’t have many resource acceleration options after the Master of Lore nerf. This particular engine for Mono-Lore takes a bit of setup to get 2 or optimally 3 Love of Tales in play. Still it is not that difficult since they’re zero cost and just need to be drawn, and fortunately Lore has many ways to draw cards. Then each play of Drinking Song, will give each hero with Love of Tales a resource. They can be recurred with Scroll of Isildur to play them 9 times in a game. Erebor Hammersmiths can increase this up to 15 times in game. That means this engine could generate up to 45 resources in a game. The entire time, the player will get to draw new hands of cards.

Council of the Wise

Council of the Wise because of its deckbuilding limitation, can be very inconsistent. The limit of 1 copy of each card in a deck works in Magic the Gathering where Elder Dragon Highlander or as it is now known, Commander is a very popular format because its card pool lots of cards with similar effects. This allows Magic decks to create consistent decks because there are dozens of cards with different names that still do the same thing. LOTR LCG doesn’t have that same depth particularly as less player cards came out in each cycle than many Magic sets. Additonally, an advantage of the LCG release model is there is little to no reprints and players don’t have to buy multiple copies of expansions except for the original core set. Drinking Song can help make Council of the Wise decks a bit more consistent. Anytime there is a bad draw or starts to stall because events aren’t being drawn, then Drinking Song can reset the player’s hand plus triggers the contract’s response.

I rate Drinking Song at 4 rings. It is a good solid card that helps dig for specific cards and makes for a fun resource engine in mono-Lore. It is a very Pippin player friendly card because it help get combos set up. That said, I think it is more a role player of the zero cost card draw events. Daeron’s Runes and Deep Knowledge are easier to play since they are zero resource cost and get the player 2 new cards. Drinking Song needs a unique Hobbit in order to replace itself. The main hurdle I find to playing it usually if I have a card I want to keep, then I don’t play Drinking Song even if all the other cards in my hand aren’t helpful. If playing Lore and looking to splash in card draw Daeron’s Runes and Deep Knowledge are top of the list. Including a third card draw event after those can take up too much deck space. Even if considering more card draw, Heed the Dream is a strong contender for the similar use case as Drinking Song. Heed the Dream let’s a player search their top 5 cards for 1 in particular and their entire deck if 3 leadership resources are paid. At that point, it may come down to if unique Hobbits are being played in the deck or not.

Love of Drinking Song by Marcelf

3 Heroes, 50 Cards
Cards up to The Land of Sorrow