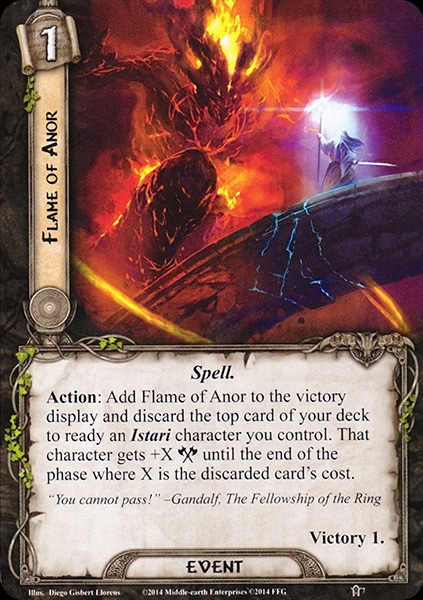 Gandalf mentions the flame of Anor during his fight with Durin’s Bane.

I am a servant of the Secret Fire, wielder of the flame of Anor.

J. R. R. Tolkien. The Lord of the Rings The Fellowship of the Ring, Ch. 5, The Bridge of Khazad-dum

There are a couple theories as to what Gandalf is referring to here. He could be revealing he is the weilder of Narya with a flame red gem. The other is based Anor’s meaning in Sindarin which is Sun. Then it could be that he is wielding the light and fire of the sun.

The link between mechanism and theme on this one is going to rely a bit on the game LOTR is based one, Magic the Gathering. In Magic, a player’s deck is flavored as a library of spells their planeswalker knows. The cards in the players deck can similarly be considered knowledge as card draw effects are primarily in the Lore sphere. Flame of Anor represents Gandalf unleashing his knowledge of magic to attack.

The magnitude of the attack boost is determined by the cost of the deck’s top card. There are a few ways to try and improve the bonus. Wizard Pipe can take any card in the player’s hand and put it on top. Imladris Stargazer can choose from any of the top 5 cards. Gandalf’s Search is much maligned for how costly it is for its effect, but it can rearrange any of the X top cards the player pays to see.

There are only 2 cards in the entire card pool that can maximize the attack boost, Brok Ironfist and Beorn. After the Core Set, there weren’t any other 6 cost cards designed. Brok generally isn’t worth the 6 cost and generally better to use with Flame of Anor. Beorn is a little more of a decision between using for the attack boost or playing. Beorn after all can attack for 8 with his ability. Although, 6 Tactics resources for 1 attack at 8 while Anor can do the same for 1 resource is more cost efficient.

There are over 30 more options at 5 cost that can also work. Many of them are powerful options for a large variety of decks. Examples include global readying from Grim Resolve and The Free Peoples, the variety of options offered by Keen as Lances, or hero revival from Houses of Healing. Additionally, many strong unique allies are also at 5 cost like the 3 Harad allies, Glorfindel, Gildor, both versions of Gandalf, and Radagast. The Over Hill and Under Hill Gandalf and Radagast allies not only can benefit from Flame of Anor’s effect, but it can discard additional copies that are no longer needed.

There are a couple cards that give additional effects if discarded from a player’s deck. Ered Luin Miner is a great 2 for 1 since it will set Flame of Anor’s attack bonus to 3 and put the ally into play. Hidden Cache is a bit of a nonbo since it won’t give an attack bonus, but 2 resources can be great.

Flame of Anor is great to include for Journey in the Dark and not just thematically. The Balrog’s 9 defense is difficult to overcome. It’s immunity to player card effects prevents any defense reduction effects like Rivendell Blade. Using Flame of Anor to boost Gandalf’s or Saruman’s attack with a 6 cost card can get any other attacking heroes or allies to damage it. It also can work well in the the original Balrog Fight scenario, Shadow and Flame. Basically any boss fight scenario is where Flame of Anor can get the most mileage. The list below has more possibilities:

I rate Flame of Anor at 7 rings. The main reason is the limited number of characters it works with. It has to target an Istari character of which there are 3 of in the game each with a hero and ally version. Gandalf’s 2 versions make that 7 possible targets, but 2 of the ally versions are only in play for a single round. Getting Flame of Anor to work with Core Set Gandalf of Saruman ally would take some luck or lots of card draw. Over Hill and Under Hill Gandalf ally or Radagast ally at least can stick around although Radagast ally’s attack is low at 1. The other inconsistency in the card is the reliance on the cost of the card being discarded from the deck. There are at least cards to set it up and make it more consistent. Wizard Pipe among them in particular works well with both Gandalf and Radagast heroes. Still it can be much to build around for a single event. A powerful event especially when a large attack boost is really needed. It just won’t make it into very many decks and be somewhat situational.

The original idea was to have Northern Trackers and Thror’s Key to negate the Forced effects on locations in Desert Crossing. They still can, but it’s not going to single-handedly win the scenario for you.

3 Heroes, 51 Cards
Cards up to The Land of Sorrow

Player Side Quest (2)
2x Rally the West (The Black Serpent)

The original idea was to have Northern Trackers and Thror’s Key to negate the Forced effects on locations in Desert Crossing. They still can, but it’s not going to single-handedly win the scenario for you.

3 Heroes, 51 Cards
Cards up to The Land of Sorrow