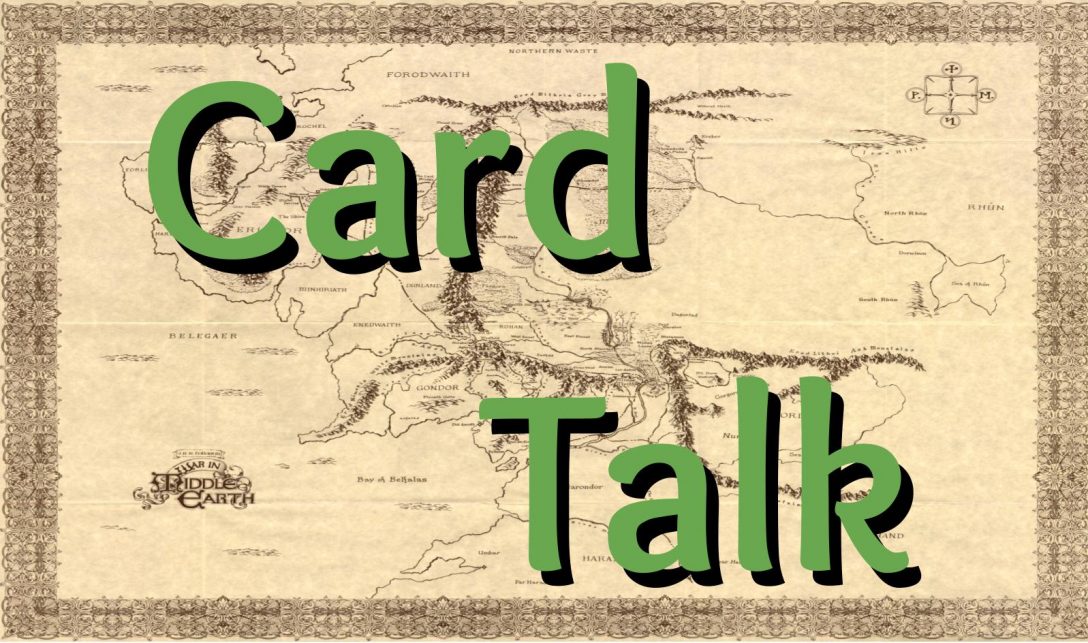 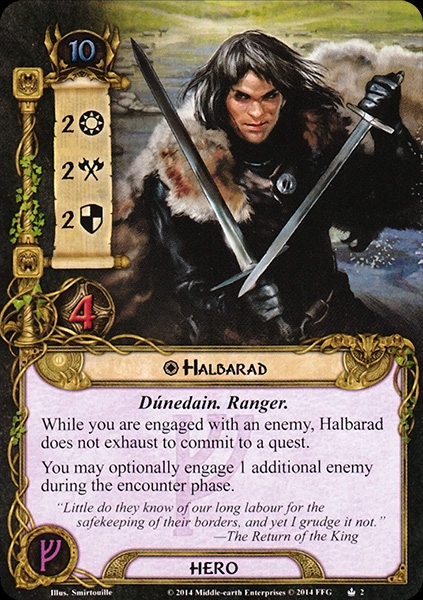 “2 against 1, eh? It’s almost a fair fight for you but you really should have brought at least one more to make it even.” – Halbarad probably

Halbarad received a message to join his Chieftain Aragorn in Rohan. He and 30 other Dunedain rode south. Later joined by Elrohir and Elladan, they met Aragorn and accompanied him through the Paths of the Dead. Once Aragorn summoned the dead, they rode for Pelargir fighting off the Corsairs they found there. Halbarad took command of one the Corsair ships and sailed for The Battle of Pelennor Fields. He fought in the battle but died in the fighting.

Halbarad like many of the Dunedain heroes has balanced stats with 2 willpower, 2 attack, and 2 defense. This fits with the Dunedain considering their small population having to be self-sufficient and ready to defend their people. The Dunedain in the game generally gain bonuses for having an enemy engaged. This makes sense with their severely depleted population and many enemies around that they would have to rise to each challenge. His ability to quest without exhausting while engaged with an enemy represents this. His ability to optionally engaged 2 enemies is more representative of the Dunedain’s actions during the Watchful Peace. During that time they fought many minor battles with orcs and goblins to keep the lands of Eriador safe.

Halbarad’s built in action advantage and balanced if mediocre stats make him a prime target for stat boosts. In sphere and in theme are the Dunedain signal attachments from the first cycle.

While the bonus is only +1, the ability to move to other heroes shouldn’t be discounted. Especially for Dunedain Warning’s defense boost that can help another hero defend for a turn. Dunedain Quest’s willpower is a bit expensive especially when the Core Set gave players Celebrian’s Stone that gives +2 for the same cost. There aren’t many options for targeted willpower boosts in Leadership although the global boosts from Leadership Faramir ally of Aragorn with Sword That Was Broken are also options.

Aside from Dunedain Mark, Leadership doesn’t have many permanent attack boosts. Sword of Numenor is a very thematic one that comes with the possibility of some resource acceleration if fighting some tougher enemies. If utilizing the side quest bonus Dunedain alongside Halbarad, Legacy Blade can be a fantastic attack buff. Tactics has more possibilities with Dagger of Westernesse being the best to possibly get more than +1 attack from a single attachment.

Defense bonuses are generally better to build up on him at least when using other Dunedain. Another defender that can safely keep a 3 or 4 attack enemy engaged helps build up their bonuses. Fortunately, Leadership has some of the best defensive attachments with aforementioned Dunedian Warning, Ancestral Armor, and Armored Destrier. The destrier doesn’t convey a bonus to defense, the action advantage and shadow control is just what the Dunedain archetype needs to keep multiple enemies engaged for several turns.

Specifically, Forest Snare and Entangling Nets synergize very well with Halbarad and the rest of the enemies engaged bonus Dunedain. Forest Snare allows a player to just keep an enemy engaged for the entire game without having to worry about defending or any shadows. Entangling Nets is similar because of the attack reduction making defending easier. The action disadvantage of defending can be offset with Outmatched or just taking the attack undefended. Shadows effects can still be an issue with it in some scenarios.

Normally a player can’t get Halbarad to quest without exhausting unless puts an enemy engaged with a player first thing. Dunedain Hunter and Wait No Longer can help get that ability going. They can be especially useful in true solo play if no enemies are forthcoming since they both search the top 5 cards of the encounter deck for one.

Forth, The Three Hunters Contract

One of the downsides of this contract is that the player is limited to just 3 heroes. Action advantage is key to maximizing the heroes questing and combat potential. Any hero with it built in can make use of the contract’s willpower bonus and the combat bonuses of the extra restricted attachment better than ones without.

The Shadows of Mirkwood featured the Goblin Sniper that could only be engaged if it was the only enemy in the staging area. This could lead to the dreaded double Goblin Sniper situation where neither can be engaged optionally. This left only Son of Arnor and reaching 48 threat as a solution early on in the game’s life. Halbarad’s ability gives players another way to engage both snipers before 48 threat.

Intruders in Chetwood is another quest that benefits from his ability to optionally engage 2 enemies since they don’t make normal engagement checks. Leaving enemies in the staging area is not a good idea since each one raises the players’ threat by 1 for each enemy there. Wastes of Eriador similarly has enemies not make engagement checks when the day/night objective is on the day side. Engaging multiple enemies during the day is better since many have additional effects or are stronger during the night.

I rate Halbarad at 6 rings. The built in action advantage works pretty well with his balanced stats. Keeping an enemy engaged to quest isn’t that difficult for many quests especially if also running traps or with an Armored Destrier. Still it has its risks especially since his balanced stats are only 2 on each. He always requires a bit of set up to be more than just a little supplement questing and combat power. Even when built up, he won’t rival the more specialized heroes with a stat of 3 or 4. Still can be a good addition to line ups with a good questing and defending hero. Starting a quest with 6 willpower from heroes typically provides enough willpower to start. Defense is hard to skimp on since one bad enemy attack can easily take out a hero. Attack power can usually wait a turn or two to come online and easy enough to get from allies or attachments.

His ability to optionally engage 2 enemies doesn’t have many uses for solo play. Still in multiplayer it can supercharge a Dunedain deck. It is still tricky to use well considering the Dunedain can take a little while to get rolling. The heroes often have weaker balanced stats. The allies can be expensive and span all 4 spheres. This can encourage players to build tri-sphere to cram as many Dunedain allies into a deck.

Halbarad at one point was one of my most played heroes. He can be used to good effect but he takes some building around and time to set up. Many quests won’t give players time for it. He’s a decent hero and well worth playing. There are just many that are better because they don’t need that set up and support.

Three Wolf Hunters for Wastes of Eriador by kattattack22

A Forth, The Three Hunters deck utilizing Halbarad as a primary quester and secondary combatant.

Contract (0)
1x Forth, The Three Hunters! (The City of Ulfast)

3 Heroes, 50 Cards
Cards up to Challenge of the Wainriders