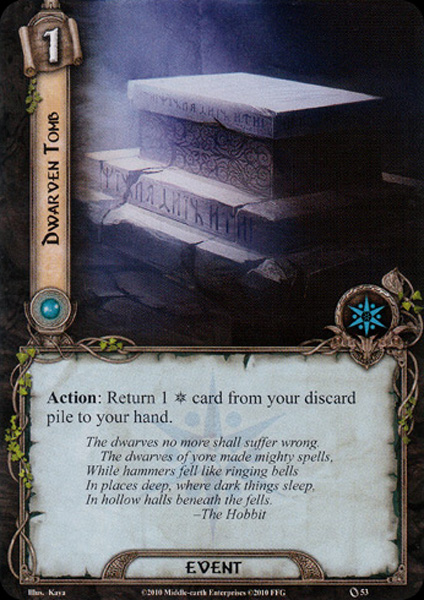 Almost like having an extra copy of any Spirit card.

There are 2 possible tombs from the books this card can be based on. It could be Thorin Oakenshield’s tomb where he was buried with the Arkenstone after The Battle of Five Armies. The other is tomb of Balin in Moria. The Fellowship of the Ring found Balin’s tomb in the Chamber of Mazarbul when passing through Moria and ambushed there by orcs.

The flavor text is an except from Far Over the Misty Mountains Cold. It is not version the Dwarves sing after the unexpected party at Bag End, but one they sang after Smaug was defeated. The main difference in the excerpt is the first line, “The dwarves no more shall suffer wrong,” instead of “To seek the pale enchanted gold”. This could refer to either Thorin or Balin since both were part of that company. It is possible FFG kept it intentionally ambiguous, but the art favors the description of Balin’s tomb with the shaft of light falling upon it.

The chamber was lit by a wide shaft high in the further eastern wall; it slanted upwards and, far above, a small square patch of blue sky could be seen. The light of the shaft fell directly on a table in the middle of the room: a single oblong block, about two feet high, upon which was laid a great slab of white stone.

The Fellowship of the Ring, Chapter 4: A Journey in the Dark

I know from a couple designer interviews that LOTR LCG is inspired by Magic the Gathering. The discard pile in Magic is called the graveyard. The thematic tie of a tomb to the discard pile recursion mechanic is well known to veteran Magic players. It still makes sense in this game as destroyed allies and heroes are put in the discard pile as well. The brining a card back out of the discard pile doesn’t fit that well with finality of the tomb. If it had been a reference to the Valar sending Gandalf back to Middle Earth then it would have been more thematic.

Spirit has some of the most powerful and widely useful event cards in the game. A Test of Will of can neutralize many treachery encounter cards which can account for about a third of a scenario’s encounter cards. Additionally there are some enemies with When Revealed effects that it can cancel. Hasty Stroke can be a game saver against nasty shadows. Elrond’s Counsel and Galadhim’s Greeting are staples in threat reduction.

Dwarven Tomb can act as like an additional 3 copies of each of those events. Events are a more common target because events go right into the discard pile after being played making them easier to recur. Also allies and attachments have their own specific events, Stand and Fight and Reforged. Those 2 are generally better than Dwarven Tomb for allies and attachments because they put the card into play. Players want to keep allies and attachments in play usually as well. Still the flexibility to get any spirit card can be more advantageous in some decks.

Caldara, Dwarven Mining, and Noldor Discard decks can all benefit from that flexibility due to each has a similar game plan. Put cards into the discard pile. Caldara decks want to fill it with powerful allies and when Caldara is discarded they get 2, 3, or even 4 allies for the price of an 8 threat cost hero. Dwarven Mining will put cards directly from its deck into the discard to power the abilities of its heroes and allies or possibly get free attachments via Well-Equipped or Ring of Thror. Noldor discard will discard cards from hand for abilities or to play allies with To the Sea, to the Sea! There is always the risk in these decks of either blindly or forced to discard a necessary card. Dwarven Tomb is a great insurance to get that card. Dwarven Tomb also turns the mining effects into pseudo card draw. As the Dwarves put more cards into the discard pile, the potential targets of the tomb expand.

Dwarven Tomb and Map of Earnil fill similar roles but together can be ridiculous. The map can target the tomb to bring back another card then put the tomb on the bottom of the deck for another possible use. This can lead to an infinite loop with an empty deck as the tomb can target Map of Earnil to return to hand. Play Tomb again with the returned Map to return another Spirit card. A little card draw with Elven-light and this loop can occur every turn. Dwarven Tomb retrieving Knight of Belfalas, especially if somehow all copies ended in the discard, allows for another chain of discard recursion. The Knight can retrieve each other copy since they’re all Gondor allies. Chump block while one is in hand and just get back after replaying it.

There are a few quests that will force players to discard cards from their deck. Deadman’s Dike from The Lost Realm, Dungeons of Cirth Gurat in the Haradrim cycle, and Under the Ash Mountains. There are also many cards scattered across various quests that force players to discard cards from their hand or their entire hand. Dwarven Tomb can help mitigate the downsides of these quests aside from just getting a key card back. Many of them have effects that additional effects if another copy of card is in your discard. Deadman’s Dike and Under the Ash Mountains both have a player lose if they run out of cards in their deck. Dwarven Tomb can help find a way to get some cards shuffled back into the deck.

I rate this card at 4 rings. It has a pretty flexible and useful effect considering it can get any Spirit card out of the discard pile. I’ve used it fairly often even back when I had only 2 copies from my 2 old core sets. I’ve used it in discard recursion focused decks as insurance and added to decks with Spirit as potential extra copy of Test of Will. In my experience, I usually would rather just have the regular card drawn and it can cut from the deck list pretty easily if extra room is needed. It also be helpful in trimming a deck since I’ll drop a 3rd copy of A Test of Will and another generally useful Spirit event like Hasty Stroke. Dwarven Tomb then I’ll count on as the 3rd copy for both. Still I find I’ll hold on to Dwarven Tomb just in case or won’t have the spare resource to play it and the card I pull out. Discard recursion, I’ll find myself trimming Dwarven Tomb if I’m just using it as insurance. One copy sometimes is all that is needed to tilt the odds to seeing it late game when it might be needed. It’s that “just in case role” it fills that while a generally useful card when playing Spirit, that it moves more towards a niche card rather than a powerful will always include card.

Doomed Rohan – To Catch An Orc – Minimum Purchase by kattattack22

Rohan themed deck for To Catch an Orc using only Voice of Isengard and 1 old core set. Dwarven Tomb doesn’t feature necessarily in this deck but it serves as a possible 3rd copy of A Test of Will.

3 Heroes, 50 Cards
Cards up to The Voice of Isengard

Burglar’s Turn to Side Quest by kattattack22

Multiplayer questing and support deck that uses some Noldor discard effects and dwarven mining. Dwarven Tomb here is an insurance policy if forced to discard something important or turn Zigil Miner into pseudo card search.

Burglar’s Turn to Side Quest

3 Heroes, 51 Cards
Cards up to Wrath and Ruin